Stereotypes are often derived not only from the people that live in a certain country but also from the products they offer. German goods for example are often ascribed attributes such as precision, quality, innovation and longevity. Think about the cuckoo-clock or how Audi plays on being steadfast and reliable by using a heartbeat sound at the end of every commercial they produce. When it comes to the world of golf, PuttView is the product that fits all those attributes the best. Founded by two German engineers to revolutionize the way we learn with the help of AR. Since Viewlicity, the company behind PuttView, was founded in 2015, it has managed to convince some of the best of the game of its qualities. Surprisingly enough that story almost never happened because of a bus.

But let us start at the beginning of the story, because a product would never come to life without the founders behind it. In this case Christoph Pregizer and Lukas Posniak, two Germans that met each other by chance during their MBA program at the Parisian Collège des Ingéneurs. “Founding was never something that I had in mind. It just never crossed my mind before.

But that changed with Christoph and that program”, says Lukas who, at that time, planned to have a career in the automobile industry. “No one in my family has ever founded a company and so it was just never present in my life. But Christoph and I knew we wanted to be working together, we just didn’t know what exactly it was going to be”, Lukas continues. Christoph on the other hand came into the equation with a different perspective. “For me it was always a given, that one day I wanted to found a company. While my dad never owned his own business, he had told me that it was something he always wished he would have done”, explains Christoph. Despite those different approaches, both Lukas and Christoph quickly agreed on one thing: They were going to found together.

A dream without an idea?

Christoph and Lukas finished the program and have not lost touch ever since. Quite the contrary. They went on vacation together and continued to think about an idea that was going to be worth elaborating on. However, life went on and they took on jobs. Lukas at Volkswagen and Christoph at Siemens. 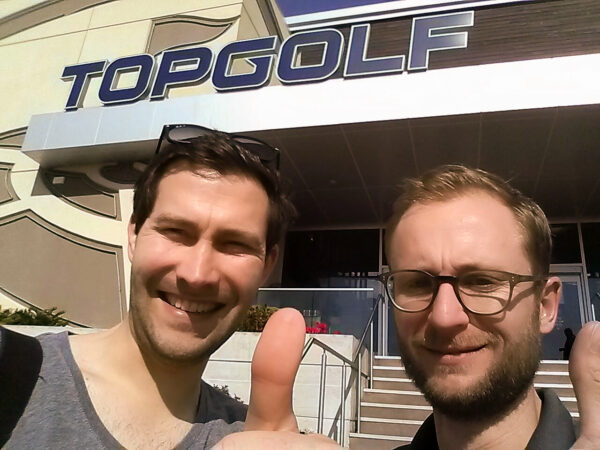 For a lot of people that might have been a turning point because they were both looking at bright careers and had only the dream of founding rather than an idea to support that dream.

“At one point we wanted to do a website that would help find out the best bus connection for the best price. Kind of like booking.com but for busses”, says Lukas while laughing. “By the way, such a website exists now”, adds Christoph with a smirk on his face. Luckily, they didn’t go down that rabbit hole because they realized it was not worth it at that point of time. And this is where the story of PuttView begins.

As a young boy Christoph was skiing competitively, even winning the state championship of his home state once. But skiing takes a great toll on your body. After an accident where he fractured his tibia, he woke up in a hospital bed after having surgery. “I just told my parents that this is going to be it. I was done with skiing”, says Christoph. So, he started to look for another sport and discovered golf. He quickly became an avid golfer and at his best reached a handicap of around -1.5. Good wasn’t good enough. Due to his small stature, he knew he would never be as long off the tee as some of his buddies and wouldn’t be able to compensate for it even if he built up more muscles.

Instead of dreading that fact he turned his focus on his short game and started to wonder. “I knew it was possible to calculate every putt on the green, yet there wasn’t any product out there that would do it for you”, explains Christoph. Then Lukas learned about AR technology and pitched the idea to Christoph. “I didn’t know anything about golf, but it made sense what he was explaining to me”, Lukas remembers. After seeking consultation by leading experts in the field of Augmented Reality, there it was! They had found an idea that both saw great potential in. 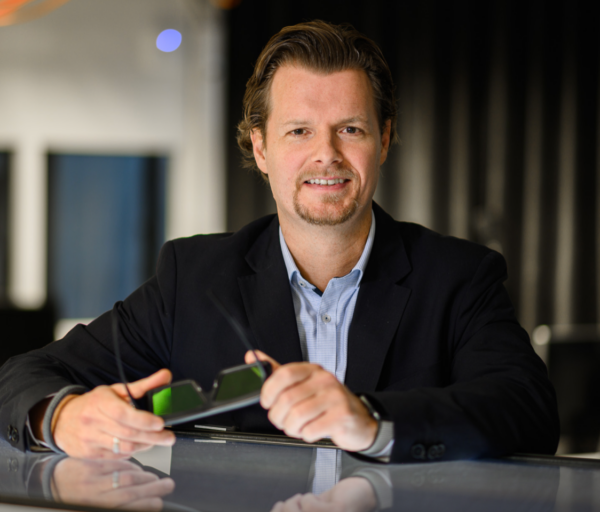 The answer is PuttView

On the look for a mentor they were talking to professors all over the country. In the end they came across Prof. Dr. Frank Steinicke a professor at the University of Hamburg for “Human-Computer Interaction” at the Department of Informatics. It was a good fit from the very beginning.

Christoph and Lukas soon after quit their jobs and moved to Hamburg where they were accepted as Exist-Scholars by the University of Hamburg and founded a company named Viewlicity. The name is derived from the word simplicity and their vision is to “create engaging learning experiences using immersive technologies by simplifying the learning process through visualization”. In other words, enhanced learning through Augmented Reality. Speaking in terms of PuttView the plan was to project every aspect of a putt (e.g., break, speed, aim line) onto real greens through AR glasses. 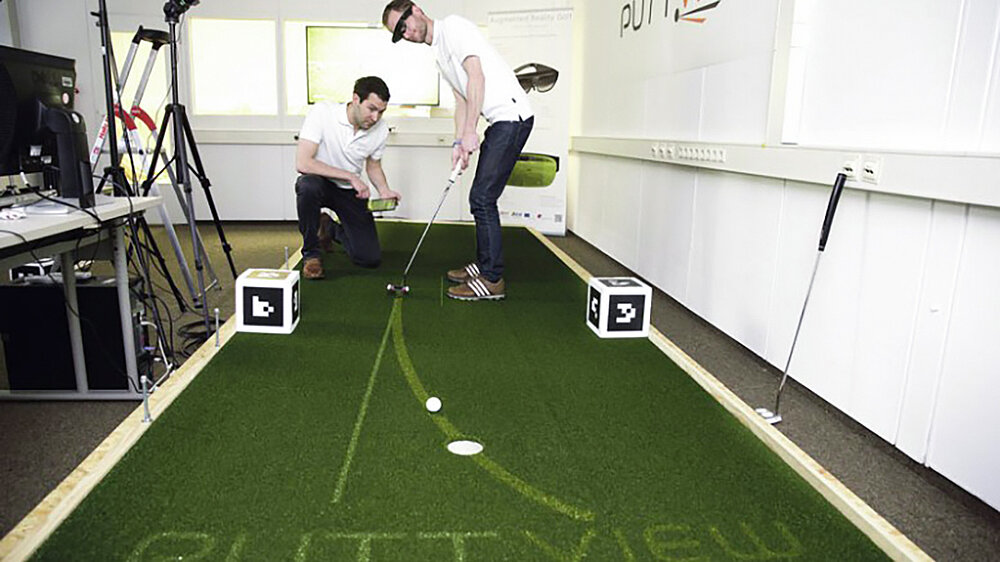 “To be honest, we were pretty disappointed once we arrived in Hamburg”, both founders admit. “We were ready to go but that was quite a setback”. What were they talking about? When they came to Hamburg the first AR glasses were basically just hitting the market. Like with a lot of new technology the hype that was created around it was big. Bigger than what the product could deliver and something that only one thing could fix: time. However, waiting obviously wasn’t an option for Christoph and Lukas so they decided to take a step back. “The technology wasn’t going to be ready anytime soon”, says Christoph. That is how they came across the idea of using mounted projectors to project the lines and contours onto an indoor green. Essentially the PuttView, that is now known to many great names of the game, was born.

Reaching the top of the game

Even though the word simplicity is in their company’s name, founding is never simple. With the early setback because of the AR glasses they had gotten off to a shaky start. “I just never gave up and kept contacting people”, explains Lukas who took over the business side of the company. “But to be honest once our product was out there a lot of times people came to us, and not the other way around. Sometimes I didn’t even know how they found out about us”. One of the people Lukas is talking about is Phil Kenyon, who became one of the first customers of PuttView and stayed to become a long-term partner. Phil being the putting coach of many major winners and top ten players, was the starting point for a lot of new contacts and there couldn’t have been a better reference point than him for a young product like PuttView. In early 2017 Christoph and Lukas went to the PGA Merchandise Show in Orlando in order to present their product in the US at the biggest trade show in the golf industry.

And they managed to create quite the buzz. Universities, facilities and players alike saw the huge problem-solving aspect of PuttView. Because up to this point it wasn’t possible to know if you missed a putt because of the wrong speed, wrong aiming or starting line, a green-reading error or a combination of these factors. PuttView however gives you immediate visual feedback on every putt showing the ideal line as well as real-time ball tracking, for example also aiding coaches in helping their students understand what they need to work on. Four years down the road, players like Tiger Woods, Bryson DeChambeau, Justin Rose or Tommy Fleetwood are among the PuttView Users.

“Having customers like Bryson DeChambeau is very valuable to us and we have a very good relationship with him”, says Christoph. “it is important to respect those partnerships and the players behind it. He knows that we value him and for us it is more important that we respect his boundaries rather than exploiting his name for sales revenues etc.” 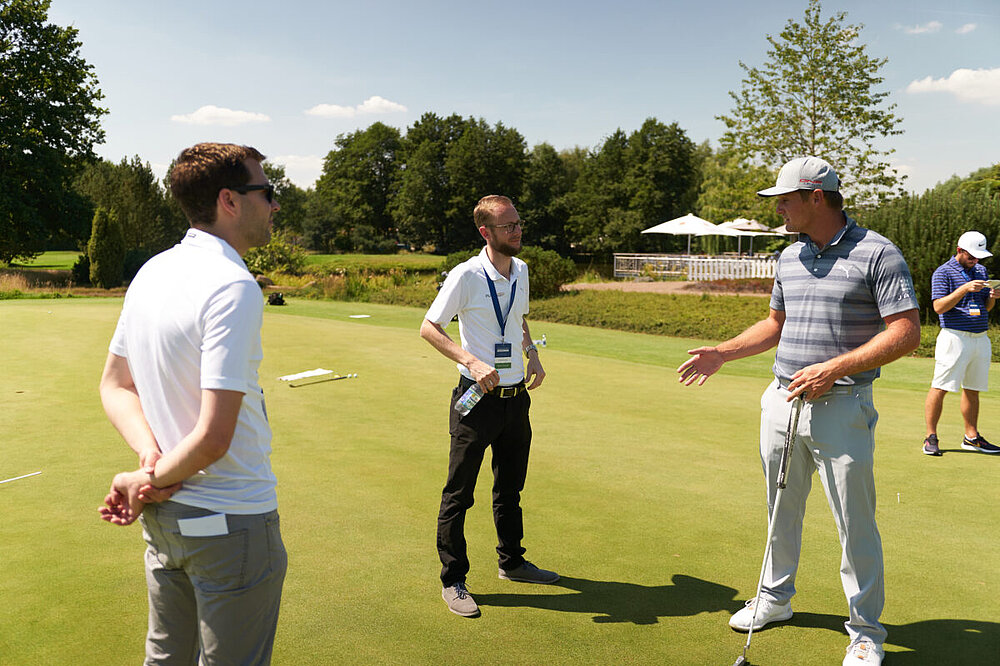 Through those relationships that were created at a very early point, PuttView managed to establish itself in the US and other parts of the world. Christoph and Lukas were featured in international (golf) publications , international TV productions and won multiple awards including a first place at the Auggie Award, the “Oscar” of Augmented Reality, in 2016 and a second place at the CeBit Innovation Award 2017. Rightfully so, those memories and achievements still rank high on both founders “highlight-lists”. 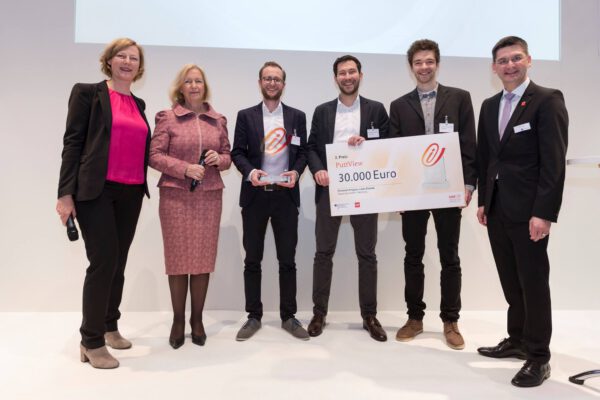 The future story of PuttView

“To be honest I thought we were going to be a little further at this point of our company’s history”, says Christoph with a smile on his face. Having developed PuttView Christoph knows the huge potential that is still left in the product. “There were many highs and lows in that story. More than I could count. Corona for example was a huge problem. I still remember the day the US decided to close its borders.” Suddenly, residents from the EU could not enter the US which was, and still is, the biggest market for PuttView. “We just didn’t know what to do”, remembers Lukas. “How long is this supposed to be going on? Quite frankly it was scary.”

A year later things have changed. People have gotten used to the new situation and solutions for distribution problems were found. After all, if now isn’t the time to think about an indoor solution for your home or facility, then when is, right? Among other things that is the reason that both founders are looking into the future with a smile. “There is still a lot of potential left in the product itself.

We just launched our PuttView Yardage and Green Books but haven’t yet gotten to our initial vision to bring PuttView onto real greens through the AR glasses. That will be a huge game changer and we are working on making it reality soon. Once we are able to bring the product to the consumer, I believe we can rightfully speak of a revolution of how people will practice their putting”, says Lukas. “I hope in the next five years we will have grown out of our current office”, adds Christoph. “And maybe already work on the next bigger thing after PuttView. However, I am especially proud of our team and what we have become. I hope that we grow not only as a company but also as the team we already are.” With those words in mind, it is safe to say that precision, quality, innovation and longevity are attributes that can definitely be ascribed to both PuttView and its founders.